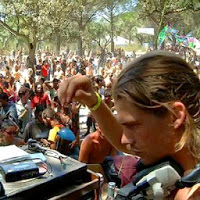 1  – Doof Featuring Simon Posford – Cosmic Toothgrinder  8:20
1994 / Source: Posted in the old Shpongle site / Appeared in P2P sites in mp3 format either as ‘Cosmic Toothgrind’ or as a Hallucinogen track. Nick Barber stated that this is almost entirely Simon’s and that he holds no rights to it, but on DATs it circulated like this.

2 – Doof – Start  6:02
1993-94 / Source: French DAT circles. This track is similar to Oafystoat and very similar in its structure; it features only the up-tempo part and different variations to it.

3 – Doof – Oafystoat  7:53
1993-4 / Source: Nick Barber / This track was composed as a demo track for the label Nova Mute. It has a long 2 minute ambient introduction and then turns into a trance track. An earlier, very similar, version of this track exists, that had no name according to Nick but that got copied to DAT tapes as “Ceremony” .

5 – Doof – The Message  8:22
1993-94 / Source: Indian DAT circles / This track was another demo made for NovaMute, actually composed in their studios but never really finalized or planned to be released as the artist didn’t like how it came out.

6 – Hallucinogen – Angelic Particles (Doof Desk Mix) 10:21
1995 / Source: Nick Barber. This haunting version has been made when Nick and Simon where composing the track and when Nick decided to give it a take at the mixing desk. The track has long ambient parts but an uptempo part too.

7 – Doof – Live @ Return to the Source 1994
1994 / Source: Nick Barber. Nick recorded his live performance in London and that is where the live mix was extracted from for the 2CD released on DAT Records. However, according to Nick, the tracks being played were not very much tweaked compared with the released mixes, except for a few. The full live set has not been shared with anyone so no further info are available.

Nick has mentioned other tracks having been recorded but not shared and just their name and style were given.

Notes
• All tracks confirmed by Nick Barber and licensed to DAT Records (2014).