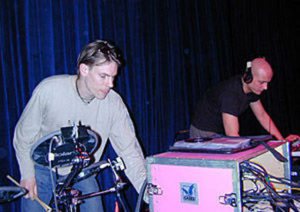 Live Sets
L1 – Live At Earth Spirits, Signalwerk Mainz, Germany 68:25
1999-02-29 / Available for download in MP3 format (320 kbps) on Haldolium-Music’ Soundcloud page / “The only known recording of Haldolium touring “Deagua”, with the Big-Gear-All-Hands-On-The-Synths-Setup of the early years. 2 Sony Mini Disc Players were playing the basic tracks, but special “live versions”, all 142 BPM, with things missing and long parts with just Kick&Bass – that holes were to be filled live… The Mini Discs couldn’t get beatsynced, so you have traditional outro-intro transitions here. An Atari ST was synchronized manually to sequence the synths and samplers… nudging like you’d nudge vinyl or CD’s, speeding up and down with + and – keys until it’s on beat… for a couple of minutes). On Stage were Atari ST 4MB, 2 Sony Mini Disc, Korg MS20, Roland SH 101, Roland JP 8000, Roland S330 Sampler, Novation Drum Station, Doepfer MS404, 5 Multi FX devices of questionable quality, 12 Channel Mixer and 2 young trancers.”

L2 – Live At Soma Loba 64:51
2000-09-02 / Available for listening on Minimal Pکy Boutique YouTube channel / This mix appears sometimes with an error in the date (September 2002) / No tracklist available